Summer Internship, I was told, was one of the most important part of my MBA as I would get a chance to apply the knowledge gathered and get a reality check on my progress over the first year. So, naturally, I was all excited to start my internship at Feedback Infra Services Pvt. Ltd. – a Consulting firm in Gurgaon, which provides services in varied domains extending from Energy, Transport and Hospitals to Real estate.

I was determined to prove my mettle with this study and to improve my prospects at getting better projects in the future. This was one of the numerous life lessons I learnt from my professors during my first year at Great Lakes – that in order to get something, you must first deserve it. So I worked and worked and worked hard for it. And it paid off too, as my next was a live project on “Market Assessment of EPC Companies in Transmission & Distribution” for a foreign investor.

It has been little over a month since I joined and I have got the opportunity to work and be a part of about 10 different projects out of which, two were specially assigned to me by the Associate Director of Feedback Infra. Some of the projects are tough as no data or information is readily available for analysis but that’s what has made work fun – especially making reports after analyzing different upcoming/projected programs in the power sector.

My first month here at Feedback Infra, was very challenging to say the least but there was also a lot to learn and I would like to thank my mentors at Great Lakes for providing me such a wonderful opportunity.

Landed at the Delhi airport and the first thing I thought was that my face was going to tear off because of the 40 degree heat wave. It made the Chennai heats seem like a breeze. FACT!

Thank God for the AC cab, I made it to the college. The admissions team handed over a few documents for me to fill and then there was the long wait for sorting through the fee, accommodation and scorecard papers. Finally, I was done with the registration process around 4 pm and was ready to be taken to what would be my home for the next year.

The first day also taught us a lesson in contingency planning for the lectures that were supposed to be round up by 5:30pm continued till 7:30pm leaving us with no chance to go back to our hostels and change. And we did well for beginners. For, come 8 pm, we were at Club Rhino, ready to party in our full fledged business attires! 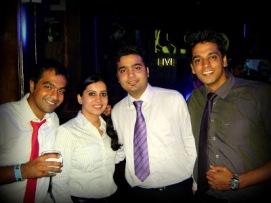 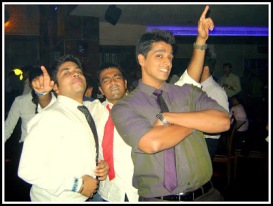 and when the drinks kicked in !

Seeing the professors and seniors recollecting their time together made us realize that we were only a year away from a party like this organized for us and that, indeed, there was no time to stand and stare in a yearlong MBA program!

But all good things come to an end. And so did the party. And finally, we headed back to our rooms wondering whether we could battle the hangover and wake up early enough to make it to the Convocation the next morning!

In Indian society we find a typical hatred for wealth. From thousands of years it is believed that “while earning any kind of wealth there is pain, while protecting the earned riches there is pain, incoming and outgoing of wealth both are painful; root cause of all pain is wealth and therefore is deplorable”. Such a negative conviction has made Indians poorer and poorer over the centuries.

In relation to earning wealth there is one more negative perception that wealth can be generated by fraud only and it is impossible to attain prosperity with honesty. We ignore that in order to succeed in any business, you need at the same time knowledge & skills, courage, passion to win, entrepreneurship, creativity, vision, intellect, acumen, concrete planning, a strategy and focus.

I remember a dialogue with one of the respected businessmen in our country. He said “Making profit is our religion. As long as profit represents our vision, our first mover advantage, creativity, strategy, efficiency and hard work and NOT any kind of manipulation, tax evasion, cheating the clients by compromising on quality; it happens to be a sacred and most desirable dictum for us. We live for it. Such “earned” profit has a special value for us in terms of our efficiency, efficacy and pride”

My short trip to US last year reinforced in me a couple of lessons. The first one, the youth there have a special pride in earning. They don’t want to inherit, they don’t want to depend on their parents for higher education, and they don’t want to acquire money without “earning” it. My friend is Associate Dean in one of the Business Schools there. Once he told me that his College Building is cleaned up during 0-3 hrs., so that no one comes to know who are cleaning. Once he happened to stay late and found one of his professor friends from the nearby college in the cleaning team. They had a chat and his friend told him that he needed some extra money so he decided to do some extra “work”. What a value in Life !!

In India one unfortunate thing we observe is that with growing wealth, the arrogance also grows and sense of proportion weakens in spending. It is true of individuals as well as large groups. Some companies like TATA & WIPRO have shown their sensitivity towards CSR. Govt. of India has enacted one policy that companies making profit of more than Rs 5 crores, will have to spend 2% of their profit in CSR activities. With this, India has become the first country in the world to have such a mandatory provision towards sensitivity to return a small proportion of your profit to society wherefrom you have earned it, of course with your caliber.

While accumulating wealth one thing to be remembered is that it is like beehive. Someone else gets the honey. Its proper utilization at the end of the day rather than leaving it for natural inheritance is of paramount importance. I don’t remember the name of my grandfather’s father, so how can I expect to be remembered by my coming generations within the family?