“Of all the forces of nature, I should think the WIND contains the greatest amount of power.” – Abraham Lincoln

India is placed 5th on the Wind Power World Map, after China, USA, Germany, and Spain. India’s installed capacity is 22,000 MW; Tamil Nadu leading other states like Maharashtra, Gujarat, Rajasthan and Karnataka. India’s wind power potential was estimated by MNRE as 48,000 MW at 30 m height. C-WET placed it as 102,788 MW at 80 m height. According to a study by the Global World Energy Council conducted in partnership with the Indian Wind Turbine Manufacturers Association, wind energy capacity can be as much as 231,000 MW in India including offshore wind. There are more powerful and reliable winds above 300 m. Multi sets of rotor blades, high tower heights etc. can lead to higher energy capture.

State-of-the-art technologies are now available in the country for manufacture of wind turbines. All the major global players have their presence in the country. The unit size of machines has gone up from 250 kW to 2.50 MW and tower height has gone up from 30 m to 120 m. There are 19 manufacturers in the country with an annual production capacity of 10,000 MW (2nd largest in the world after China). Wind turbines and their components are being exported to Europe, US, Australia, Brazil and other Asian countries, earning USD 500 million annually. Govt. of India has established National Institute of Wind Energy (earlier C-WET) at Chennai with 1) Wind Resource Assessment Unit 2) Wind Turbine Testing Unit 3) R&D Unit 4) Standards and Certification Unit and 5) Information, Training and Commercial Services Unit. Wind project cost in India is one of the lowest in the world.

Renewable Energy (RE) for “Energy Security” 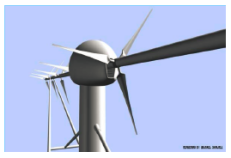 Per capita consumption of energy is growing continuously in India. Present electricity deficit being around 10%; nuclear, thermal (partly), oil & gas plants depending on imports for their fuel, national energy security can come from indigenous and everlasting sources like Hydro and other renewables viz. Wind and Solar. Hydro has always been cheaper than other options and Wind and Solar are reaching grid parity. Wind tariffs are already comparable to tariffs related to imported coal.

Avoidance/ offset of Fossil fuel generation by RE sources like Wind can reduce carbon emission and mitigate climate change impacts. India is committed to reduce emission intensity of its GDP by 20-25% over the 2005 levels by 2020. Meeting this target would mean saving of 500 m tonnes of CO2 emissions per annum. Present installed capacity of RE saves 55 m tonnes of CO2 per annum. Wind Industry in India has so far provided direct employment to 100,000 and indirect employment to 1000,000 people mostly in rural and semi-urban areas.

Since wind power is mostly private sector driven in India (80-90% investments being from private sector) it deserves a consistent policy support from the Government in order to achieve NAPCC targets (capacity addition of >7,000 MW per annum) without any burden on the national exchequer. Besides RPO/ REC, FIT and other tax benefits like Income Tax holiday, concessions in Indirect Tax; Accelerated Depreciation (AD) and Generation based Incentive (GBI)-mutually exclusive, should be continued without any reversals in order to attract Companies with good balance sheets and Independent Power Producers (IPPs) to wind sector.

Annual average Capacity Utilization Factor (CUF) of Wind Energy plants in India is 18.33% (against that of 17.5% in Germany).However, 19%-22% has been recorded in India during last 5-years. Such CUF is because of seasonal and cyclic variation of wind.The efficiency of wind turbine is also low because of energy extraction from thin air in the open space unlike closed conduit flow of a denser medium in case of Hydro. Wind energy penetration level in the Grid is about 4% in India and so also worldwide.

Tower Height matching with Power Law Index of the Tropics

By the time India installed around 1500 MW of wind farms, it was realized that their capacity utilization was very low. This led to a conclusion that India was not a country of very high wind regime. But near the tropics, our country seemed to have “favorable wind velocities” at higher height from the ground. Power Law Index in the windy states was found very favorable which meant that energy capture at higher heights would more than compensate for the extra cost on higher tower and its deeper foundation. Tower heights were consequently increased to 50 m and then up to 120 m for MW size machines.

Grid demand for electricity is a function of time; increasing in morning and evening and reducing during nights. On the other hand wind energy is susceptible to seasonality and time-of-the-day variations. Need of the hour is to ensure connectivity of Bulk power producing large wind farms with Meteorological centers’ forecasting system so that their production can be predicted to the connected load dispatch Center to help system operators in scheduling. This is critical in the states like Tamil Nadu where wind power share has crossed an amazing 33% level.

Variable wind and intermittent solar energy cannot penetrate optimally in the absence of a suitable hybrid RE spinning reserve or energy storage back-up; nor can it provide stable power to the grid matching with the time variant demand. Biofuel based generation and small hydro provide suitable alternatives for spinning reserve. Various energy storage technologies such as Pumped Hydro, Compressed Air, and Thermal Energy Storage are available. For capacity addition of 20,000 MW from Solar and 35,000 MW from Wind by 2020; country would need Energy Storage of 5,000 MW.

Access to electricity remains a dream for more than half the households in India. Though we have a National Grid, it needs to be expanded for last mile connectivity to the small power producers and consumers. Till such time RE can be developed in “Distributed Generation” mode. While feeding power to the centralized system, 220 kV EHV lines are drawn by the wind farm developers. However, unless the upstream strengthening is taken up, generation back down is inevitable. Thousands of MUs were reported to have been lost in Tamil Nadu for inadequacy of evacuation facility.

Based on projected RE capacity addition (>40,000 MW) in 7-potentially RE rich states viz. Tamil Nadu, Karnataka, Andhra Pradesh,Gujarat, Maharashtra, Rajasthan and Himachal Pradesh, PGCIL produced a blueprint of “Green Energy Corridor” in 2012 covering Intra/ Inter State transmission system strengthening with an estimated investment of Rs 43,000 Cr. , on the advice of CERC/ MNRE. Wind energy should be allowed to be transmitted across the country similar to Solar.

Since the wind blows in the night and sun shines in the day, Solar becomes a good choice for hybriding on a daily basis. In some cases wind being limited to 4-5 months, wind farms can be solarized to effectively make use of the land and power evacuation infrastructure with 300 days of sun shine. Hybrid systems are possible on small scale as well as MW scale with appropriate system integrators.

Re-powering the old sites having 250 kW and 500 kW machines by retrofitting modern windmills with higher output and higher tower heights would be desirable. A National Plan on Re-powering Old Sites needs to be prepared and implemented. A policy also needs to be announced by MNRE. This has advantage of capacity addition without any hassles of land acquisition and forest clearance etc. However, economics of retrofitting needs to be ascertained including pay-back of old machines.

In the past 23 years, 7045 MW has been installed offshore worldwide with individual turbine capacity increasing from 450 kW to 7-8 MW, costs coming down by 30% per decade and wind farms moving up to 100 kM inside the sea from the shore. India has 7,000 kilometers of coastline. Facilitating Offshore Wind in India (FOWIND) backed by a € 4m under the Indo-European Cooperation on RE program is aiming at resource mapping, assessing infrastructure base, policy guidance & capacity building. India is set to introduce an offshore wind policy targeting 1,000 MW by 2020.

In order to leap frog to the next level of generation, a National mission on Wind Energy similar to Jawaharlal Nehru National Solar Mission (JNNSM) needs to be propelled across the nation addressing also the issue of Wind-Solar Hybrid Systems to optimize land use and power evacuation systems, besides developing green power out of thin air.

May each day of the New Year Bring Windfall of happiness, wisdom and cheer to you all ! Happy New Year-2015!