The world provides a way to the one who knows where he has to go, said Ralph Waldo Emerson, The Great American Philosopher.

Unless we explore the purpose of our life, we would not know where to go. How to do this, is a big question. The answer perhaps lies in the following questions:

Let us take up the above questions one be one.

More than 100 years ago, a man looked at the morning newspaper and found his name in the “Obituary” column. After the initial shock, he became curious and started reading further. It read “Dynamite King dies, he was the merchant of death.”

This man was inventor of dynamite. The news printed by mistake became a turning point in his life. He started working for peace. Today Alfred Nobel is remembered by the Great Nobel prizes for World Peace and other Science streams besides Economics.

Most of us dream for success, wealth and reputation but not being clear about the ratio in which we want to achieve them. We have heard the saying “Nothing succeeds like success”. This leads to trying to succeed at any cost even by losing dignity. There is a great “Real-Life” story worth sharing, which defines the boundary conditions of success.

Reuben Gonzales in the final game of Lawn Tennis for the World Title, at match point, played a super shot to save the point. The referee and the linesman confirmed that the shot was good, and he was declared the winner. After a pause, while hesitating to shake hands with his opponent, he said that the shot was faulty. He insisted for a repeat, lost the serve and eventually the match! Everyone was stunned!! 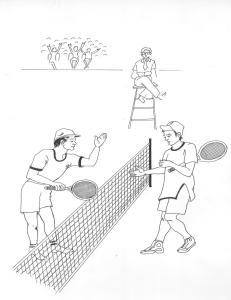 Officially confirmed “World Title” in his pocket, why did he do this? Asked some. “It was the only thing to do in order to save my integrity” was the answer. This world cup in my drawing room would have pinched me whole life reminding me that I won it by a faulty shot, he murmured.

“Success or Failure” with elegance and dignity is superior to “Success at any cost”. It is better to deserve an honor and not have it than to have it and not deserve it, said Mark Twain.

This is about the quality of success. Then the question arises what part of your effort and success you would like to be converted into wealth and what part to reputation and respect. Businessmen for example, work more for wealth and teachers more for respect. You should be clear about the ratio, so as not to regret at the end of life. Once an HR consultant told me that a number of senior professionals approach him wanting to accept a cut of Rs 10 Lakhs in their CTC provided they can get respect !

Do you limit your dreams of contributing only to your family or expand the orbit to your neighbors, colleagues, society, country or the entire world and humanity? In 1989, I received CBIP’s Diamond Jubilee Award. Those days it used to be inclusive of Rs 10,000/-. One of my junior colleagues at clerical level wanted to do a part-time computer course and I gave him that money. Today he is a proficient computer professional in a large public sector organization. I don’t think, that a small investment of Rs 10,000/- could have multiplied more than this magnitude in the last 25 years.

If you are working in a Research Organization, would you like to intensify your research to an extent that your research papers are referred even after 100 years of your death, not only in your country but the entire world?

If you are a doctor, are you working just for earning money? Certainly not. You are working also for giving relief to patients, saving their life and so on. Dr Naresh Trehan carried out my open-heart surgery in Jan’2003 at Escorts. We interacted during post-operative period. I told him Sir, I understand you conduct 18 such surgeries every day and assure at least 15 years of life thereafter. He nodded. I said “that means you are indeed adding 270 (18×15) man-years to the Humanity every day. Taking an average life of 90 years, this means creating 3 human lives every day which only a Mini-God can do”. He beamed. Can anyone expect more from his life and work?

I asked this question to myself in the year 2003. An inner voice came that though I published around 150 technical papers for various journals, book chapters, directories and conference proceedings (national and international) it would be difficult today even for me to locate them and refer them. Should I not compile them all, update and publish them as well-classified books for use of the younger generation, I thought. I did it in 2 years (not precisely in one year) but the satisfaction I derived was immense. Shri Suresh Prabhu, the-then Union Power Minister wrote in the “Foreword” of one of my books titled Hydro Environment Interface, “In the midst of an hectic activity of rejuvenating two knowledge based core institutions of power sector into self-reliant and vibrant entities, finding time for systematically compiling his over 3-decades of experiences piecing them together for the benefit of the younger generation is indeed commendable”. A professional who was in Industry during most of his career could consolidate his experience in 6-Books for the next generation before retirement from the Government service, was not a small satisfaction!!

I hope, the above format would be useful to you in exploring the purpose of your life.